"Do you see this page, Weyer? It deserves so much more!"
This article or section is a stub. You can help Amnesia Wiki out by expanding it!

"A cleansing fire always burns little Mandus, but it purifies and it makes anew."
Yasmin Chabani requires cleanup to better fall in line with Amnesia Wiki's Manual of Style.
issue: not specified

Yasmin Chabani is a major character in Amnesia: Rebirth. She was one of the crewmembers of the Cassandra[citation needed] during the ill-fated plane journey of which Tasi Trianon was a part.

Yasmin was the in-flight hostess for the Cassandra during the expedition.[citation needed]

Seeming to be gentle-natured and friendly, she comfortably conversed with Tasi about Alys and respectfully addresses Hank and the other crewmen through the journey.

She survived the crash[citation needed] and traveled with the crew through the desert.

After surviving the fortress, Tasi asked Yasmin about her knowledge of ghouls and she remarks that it was only stories, but they ate human flesh, and they were known to be "demons driven from paradise".[citation needed]

She made it to the Other World with Tasi and the crew to witnesses the Empress offer salvation to them all at the cost of Tasi's newborn.[citation needed] Yasmin cautiously remarked that perhaps even Salim could be saved.[citation needed] After Tasi's refusal of the offering, it is unknown how Yasmin's reacted or what happened to her soon after.[citation needed]

Much later in the game when Tasi became caught in a beartrap at the village, Yasmin was heard sobbing nearby. She then appeared from the darkness, transformed into a harvester but still somewhat conscious. She explained that she killed all the villagers as she could "taste their fear."[citation needed] Able to maintain some control of her body, she was not hostile and managed to help Tasi down from the trap. She explained the gaps in their memories and the Empress being the cause of their transformation, though she believed the Empress was only trying to help. As Yasmin forced the beartrap open, freeing Tasi, she remarked that she will soon lose control and purposefully trapped her own leg in the bear trap in an attempt to hold herself back. She pushed Tasi away and commanded her to run, but soon lost control of herself and began to chase her.

In her pursuit Yasmin became enraged and seemed to blame Tasi, screaming "it was you, Tasi, it was you!"[citation needed] and quickly caught up to her, throwing Tasi to the ground. Before being able to do anything more, she was fatally shot by the Doctor. 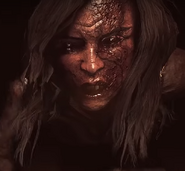 Yasmin, moderately advanced in her transformation to ghoul. 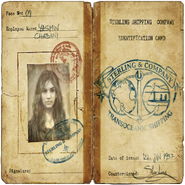 Yasmin happily perched on the airstair of the Cassandra, in one of Tasi's crew sketches.

Yasmin discussing the mysterious Other World and recent events with Tasi, in one of the rooms of the Tower.