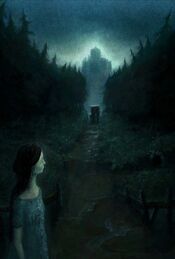 Waiting for the Rain is the fourth short-story in Remember - Amnesia: The Dark Descent. It's written by Mikael Hedberg, and includes an illustration by Rasmus Gunnarsson & Jonas Steinick. It takes place on August 18th, 1839 - a day before the events of Amnesia: The Dark Descent. It follows the story of Elise Zimmermann, as she tries to escape from her farm and her abusive father.

Elise Zimmermann is at her brother's funeral at the Altstadt cemetery. She meets up with her friend, Jacob, and talks about running away with him from her family and her cruel father. She then rides home with her family to her home, the Zimmermann Farm.

Her father, in grief, knocks over the dinner table and rushes out of the room, leaving the rest of his family in fear. Elise wanders to an old oak, where she has an assortment of items hidden. She decides to run away. She sneaks into the kitchen to steal some provisions, but is caught by her father. She runs away, but her father catches her. Believing she is a "changeling", he raises his axe, intending to kill her. In the last moment, he changes his mind. Elise gets to her feet and starts running towards Altstadt. At that moment, she is filled with hope as a carriage approaches their farm.

Click the "Expand" button at the right to read the full short story.