The Gatherers are Alexander of Brennenburg's servants. They are the primary enemies in Amnesia: The Dark Descent. There are two different Gatherers: the Grunt and the Brute. They patrol various parts of Brennenburg Castle, attacking Daniel when he is seen. As Daniel is unarmed, they cannot be killed and therefore must be avoided by running, hiding in wardrobes or hiding behind objects to avoid being seen.

The Gatherers will always alert the player of their presence with an audible growl when entering Daniel's immediate area. When Daniel sees these monsters, his sanity will lower. It is therefore best to avoid direct eye contact with them. The Gatherers generally do not remain for long periods of time and are usually unthorough in their investigations, providing Daniel ample space to hide.

If the game is played in Hard Mode, these enemies will become an even bigger threat: they will have increased movement speed, increased attack damage, higher perception in spotting the player and will linger around areas for longer. Sanity being too low kills the player in this mode, which means that not looking at enemies is even more important.

The Gatherers first appear in the Archives and Wine Cellar, although these are purely cinematic encounters; players will remain safe. In the Archives, after witnessing an actual Gatherer, Daniel can hallucinate that one is chasing him if he runs up to some rubble at the leftmost part of the window gallery, but it will disappear before it gets too close. In the Refinery, it is possible to have your first dangerous run-in with a gatherer, although it is very easy to avoid as the monster will disappear very quickly, and is easy to hide from. The first really dangerous encounters with Gatherers will occur in either Storage or the Guest Room, depending on which place the player decides to visit first upon reaching the Back Hall. The Gatherer in the Guest Room will only spawn when Daniel steps in front of the open wardrobe in the side room to the right of the entrance, and can be avoided entirely by keeping away from the open wardrobe. If the monster does spawn, the open wardrobe is intended as an obvious, introductory hiding place to teach the player about evading future encounters. Gatherers in the Storage and Prison blocks pose a much greater threat. Hiding when alerted of a Gatherer's presence is always the safest option, but sometimes the need to run will be inescapable.

Their loyalty to Alexander of Brennenburg is made known later in the game when Alexander explicitly orders them to stop Daniel from continuing forward in his mission, leading to the Gatherers to intercept Daniel in the Chancel and lock him up in the Cells. Other references to Alexander's connection with the Gatherers can be heard when Daniel's location is unknown to Alexander. At certain points in the game, Daniel will hear Alexander furiously ask the Gatherers questions like "Where is he now?" and make commands such as "Find him".

Daniel mentions in his diary the presence of sneaky and skulking servants in the castle. According to the loading screens, these servants smelled of spiced wine permeated by clove and sage. In the short story The Outrider, Gabriel is able to follow the mysterious creature due to the same particular smell. The creature is then revealed to be a servant Grunt. It is unclear whether the servants mentioned by Daniel are Gatherers, like the one encountered by Gabriel. If this is the case, they are most likely covered by a cloak - as in The Outrider - to avoid raising suspicion from their monstrous appearance.

The Gatherers are also present in the short story The Outrider, which is a part of the Remember - Amnesia: The Dark Descent short-story collection. In it, a Servant Grunt kidnaps a cat, Tinker, and knocks down a young boy, Jacob, who works at the Der Mühle inn in Altstadt. Gabriel, an outrider who grew up in Altstadt, and who just returned to the hamlet at the behest of Daniel who urged him to take him there, gives chase to the creature and puts a couple of shots in its back. After chasing it to a cave, the creature grabs hold of him, and Gabriel unmasks the beast in his panic, revealing it to be a Servant Grunt. He manages to escape its grasp by smashing it upon the head with his lantern.

A local cooper in the story, Herr Zell, tells Gabriel that the Grunt is "One of them lost souls (who) come for the animals. They collect them." confirming that this is something that has been going on for quite some time.

The Gatherers usually appear when Daniel picks up a plot item or steps into certain zones. When a Gatherer appears, it will make a monstrous cry and start looking for Daniel. Specific, intense music tracks will play while a Gatherer is roaming and stop when the Gatherer leaves, indicating safety. When a Gatherer spots Daniel, the Terror Meter can be heard and begins the chase.

When giving chase, Gatherers will alter their speed in relation to their proximity from Daniel. At close range they will slowly stagger towards him, but will quickly pick up speed from a distance. They are capable of tearing down doors and knocking obstacles out of their path. Surprisingly, they don't appear to see Daniel is hiding even if they see him enter a dead-end room, and simply give up the chase. Even hiding in a dark corner can be enough to get them to leave confused, which indicates they don't possess much intelligence. Gatherers are able to break closet doors if they see that you are inside (if they see you enter a cabinet or see you peeking out by opening the door). The cabinet will, like broken doors, remain destroyed. If trapped inside a room by a Gatherer, the player can try picking up an item (a barrel, a chair, a rock, etc.) and throwing it at the monster. The Gatherer will be knocked back momentarily, and if the player hurries, they can dart around it and possibly manage to escape. However, this action will not only drain Daniel's sanity, but the Gatherer will also recover quickly and charge Daniel in the blink of an eye. This is not recommended to do If the Gatherer has just noticed Daniel. Doing so will cause the Gatherer to instantly charge at him at full speed. There is always a warm-up time before the actual chase begins. If a Gatherer has just noticed Daniel then it is possible to quickly hide or duck around a corner. Doing this will either cause the Gatherer to lose interest or going into a short "search" for Daniel. Only when the chase music begins, then you should start running. The Terror Meter is not the key to being chased.

In most scenarios, if the creature is unaware of Daniel's presence, looking away from the Gatherer will keep the player safe. Also, by hiding in a dark corner and by crouching it reduces your chance of being noticed by the Gatherer. Avoiding direct eye contact with the creature is essential to survive and keep Daniel's sanity up. Looking at it will cause it to notice Daniel quicker as well as rapidly draining his sanity, regardless of the distance between Daniel and the Gatherer. Additionally, it is possible to remain hidden from a Gatherer by holding a large object, like a barrel, in front of you. This calls into question the Gatherers' intelligence.

Avoiding the Gatherers is not a difficult task. In most situations, Daniel is given fair warning of the beast's entrance into the map so the player should be able to find a decent hiding spot. A common misconception is that darkness is something for a player to avoid at all times. However, in the presence of a Gatherer, the player sometimes must use their lantern to stay sane. Players should not be afraid of pulling out their lantern while there is a monster on the map. However, a player should not use their lantern while in direct contact with it.

The best solution to avoiding a monster chasing Daniel is to quickly enter a room with a door. The player should immediately close and barricade the door as the creature will quickly begin to break in. If done successfully, the monster should be unable to enter the room and continue patrolling. In addition, players should avoid the temptation to look back once a monster has given chase. At top speed, their proximity to the player is closer than most will expect and checking will most likely result in the monsters closing in for an attack.

Interestingly, if you watch a Gatherer for long enough, it may become startled by a noise, holding its hands to its mouth and looking around as if in fright; it may also put its face in its hands and appear to sob. Whether this means they have any semblance of humanity left in them is a mystery.

A note found in the castle hints at the origin of the servants:

"This story reaches all the way back to the time of the Thirty Years' War. It is said that soldiers who abandoned their duty got lost in the cold, dark woods and were forever damned to roam the grounds. Their bodies wrought by their tainted souls have left them disfigured and empty of essence. Many have sighted them over the years and describe them as horrid revenants. They move silently through the woods, shying away from any beholder. They are called Gatherers as they seem to follow some ambition to steal living creatures. It is their prey which can be heard struggling inside damp burlap sacks dragged behind them which reveal their presence. What dark scheme do they follow?"
―Note in the Archives

The Grunt and the Brute have their own set of music; both enemies having three states of music for themselves making a total of six. The three samples of music correlate with the actions of both enemies:

There are also extracts of music that play when these enemies appear, but don't play as redundantly as the three samples mentioned above, as they are used for the cutscene itself, and not just the Gatherer alone. This same format of music is also used for Suitors.

It's worth noting that the Attack state for each monster is not particularly audible, because the Terror Meter blares over it. You can, however, listen to the Attack state when you press TAB to go to the interface men

Main article: Servant Grunt
The Servant Grunt is the weaker, more commonly encountered of the two Gatherers in Amnesia: The Dark Descent. While not as powerful as the Brutes, it is still a considerable threat in any appearance.

Main Article: Servant Brute
The Servant Brutes are the rarer, more dangerous type of the Gatherers in Amnesia: The Dark Descent. They deal much more damage than a Servant Grunt and they are able to kill Daniel in one hit, even at full health, making survival harder.

One of the two types of Gatherers (Servant Grunt) as it is seen in-game. Note the effect looking at the monster has on Daniel's sanity. 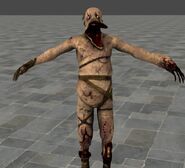 A hallucination of a Servant Grunt.

Concept art of a brute. 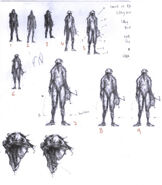 A Grunt found in the Storage.

The Brute, standing in the Morgue.

Retrieved from "https://amnesia.fandom.com/wiki/The_Gatherers?oldid=44772"
Community content is available under CC-BY-SA unless otherwise noted.