1937 or later (depending on player action)

Consumed by the Shadow (possible)

"A cleansing fire always burns little Mandus, but it purifies and it makes anew."
Tasi Trianon requires cleanup to better fall in line with Amnesia Wiki's Manual of Style.
issue: not specified

Anastasie "Tasi" Trianon (ca. 1910 – 1937 or later) is the main protagonist of Amnesia: Rebirth. She was a French drafter who, along with 13 other passengers, went missing after the plane they had chartered to take them from Algiers to French Sudan crashed in the Algerian desert.

Tasi Trianon had a complex relationship with her father growing up. At age 16, he forwent the normal parental strictness shown to girls her age (such as a household curfew) and instead gave her a compass, so that she would "always find [her] way home."[3]

Hank spoke fondly of him to Tasi, affectionately referring to him as the "old man" and saying that he "missed" the days when her father was in charge and Hank's responsibilities under him were few.[4] At some point, her father argued with Malick about mules in Wikipedia:Marrakesh,[2] a large city in Morocco (much of which was a French Protectorate from 1912–56),[5] and Tasi attended those travels with all three of them. Ergo, Tasi was likely well-traveled in North Africa and may have accompanied her father on many excursions there in her early life.

Tasi was a native of Paris and became an engineering drafter for the Triple Crown Mining Company, where her job was to draw out their plans for structures. She participated in engineering projects abroad.[6] Through both this work and earlier travels, she met her future companions for the expedition to French Sudan, including Salim Hannachi.

She unofficially married Salim and gave birth to their first daughter, Alys, and two to three months before the expedition, Tasi became pregnant with her second daughter, Amari. However, Alys was diagnosed with an unknown degenerative disease and died because of it.

In 1937, Tasi embarked on an expedition to French Sudan through Algeria with her husband and a team on the plane Cassandra.[citation needed] She accepted the invitation from Hank Mitchell, who supposed that getting the two of them away from their tragic loss of Alys and keeping them busy with a project would help the healing process.[citation needed]

Crash of the Cassandra[]

A sudden engine malfunction caused the Cassandra to crash in the Algerian desert, killing the pilot and injuring many of the passengers, including Salim.[citation needed] The survivors of the crash left the wreckage and the scalding desert and find refuge in a nearby cave, where the injured are tended to.[citation needed] The more able-bodied survivors, Tasi among them, decided to leave the injured in the caves to seek help and civilization, as their supplies could only help them survive for so long.[citation needed]

Tasi and her companions found an abandoned outpost, riddled with soldiers bodies and booby-traps.[citation needed] They encountered what Yasmin called a ghoul, or "ghûl," and it killed Jonathan.[citation needed] The rest of the crew barely managed to escape, and Hank is gravely injured. They carried on through the desert and found an oasis, where they found a shrine to a goddess of some kind, known as the Empress. Her spirit manifested before Tasi and offered the group refuge from the desert, as well as treatment for their injured.[citation needed] Tasi accepted her help and the spirit led them to a Traveler's Locket, which allowed her and her companions to traverse to the realm of the Empress.[citation needed]

Unaware of their fate, the crew prepared to return to their world. Before they left, Hank began suffering the symptoms of a Harvester transformation, mentioning some darkness that clouded his vision.[citation needed] As he lost control of his body, he implored Tasi to run.[citation needed] Thanks to the self-sacrifice of another crewmate, Malick, Tasi managed to escape the other world, and, against the admonishments of the remaining survivors, she returned to the crash site of the Cassandra.[citation needed] But, owing to the blackouts and amnesia caused by Harvester transformation, she retained no memory of what had happened from the crash until that moment,[citation needed] and this marks the start of the game.

Waking up and the Caves[]

Tasi eventually woke up in the crash site of Cassandra, remembering only the crash and her necessity to drink Laudanum for her phobia when she needed. Immediately after she had waken up, she drank a nearby laudanum and started investigating the crash site. From whatever she could remember and items she found, she learned that the survivors initially went to the Caves. In here, she was expecting to find the injured passengers alive, who were left behind until help was found. But instead, she found all of them were dead already, including her husband Salim. From the notes, she learned they were followed by some creatures. She had to leave corpses behind, in order to find other survivors and thus, continued her journey into The Caves.

During her journey, she briefly ventured to the Dark World via her Traveller's amulet. Initially, she wasn't able to fully compherend where she was and why that place was destroyed. She encountered Professor Herbert's body and she eventually managed to escape from this world. Instead of returning to our world, she went into a state of dreaming (The Room). She saw her memories of her first child (Alys), Salim and a vision about a baby. After she woke up from her dreams, she continued her search in the Deeper Caves and in here, she remembered she was pregnant again. Motivating herself via her to-be-born baby, she found a way to escape the caves and reached the surface.

French Fort, the Oasis and the Alchemist's Chambers[]

She found herself on a trail leading to somewhere. By following the trail, she eventually arrived to the courtyard of Al-Mamaru Fort, which was previously occupied by French Foreign Legion. When she first entered, she heard radio calls coming from living quarters. She investigated here and she learned that all of the soldiers and one of her companions have died in here, because of the same creature. Soon, she was able to reach to the Radio and communaticated with Doctor and Yasmin. They said they have found help in a nearby villaged and advised Tasi to come to this village. Tasi told Doctor that she had been blacking out and thus, she needed help. Doctor agreed to help once arrived to the village.

So, Tasi started finding a way leave the Fort. But, before she was able to leave the living quarters, she was chased this creature. After barely escaping to courtyard, she tried to leave the Fort from the door but failed to open it. She realized she had to blow up the door with the tank. The tank was unloaded, therefore, she had prepare a new round for it in the Arsenal. After the preparation was completed, she fired the tank and she fell to the Cistern with the tank, because of faulty ground. Due to this collapse, her head hit by debris and she fainted.

After she waking up, she started following the complex tunnel system of the Cistern. She encountered Ghouls and one close encounter with a supernatural entity in her way. Despite these, she was able to reach the Oasis. 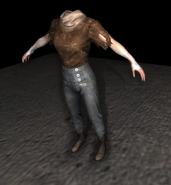 3D model of Tasi's body (before her pregnancy advances).

Tasi, as she appears in a photograph, for Hank's note on her.

Tasi resting alongside her husband, Salim, reading a book, in one of her crew sketches.

Tasi's belly before her pregnancy advances.

Tasi's belly in an advanced pregnancy.

Tasi herself, during the events of Amnesia: Rebirth (in Al-Mamaur Fort)