The darkness in the Storage feels strange and unnatural.

The Storage is a series of rooms that can be accessed via a side tunnel from the Back Hall.

The Storage contains the Trinity Rod and Four-phase Amplitude Rod, which are needed in the Machine Room to activate the Elevator. However, this is not an easy task, as heavy darkness has consumed the area (which makes the Lantern most needed), and many Gatherers wander around the Storage. Daniel even notes that the darkness feels "strange and unnatural," and the player will likely use up a couple of oil bottles in this area. This place is considered to be one of the most dangerous areas in the game.[citation needed]

The flashbacks revealed that this is the place where Daniel killed the little girl (Zimmermann's daughter) who was trying to escape the castle. Sometimes you can hear the faint cries of the girl.

"Do you see, Daniel? A whole other world – isn't it beautiful?"
The following section is written from an out-of-universe perspective.

After acquiring the first drill part, a Grunt will spawn. The best way to deal with this is to hide in a dark corner until it's gone.

After obtaining the first drill piece, go to the second expanse you can access, which is the chemical storage. Search all the rooms, as the two remaining drill pieces can be found in them. The rooms also have plentiful supplies, like tinderboxes, Laudanum, and oil. Once all three drill parts have been retrieved, all that needs to be done is to open the inventory and combine them to create the Hand Drill.

Similar to the Refinery, there are large wine barrels everywhere. However, two barrels in the vertexes of the room (they look similar to the oil barrels and are marked as primary and secondary) contain volatile chemicals and need to be used to create an explosive. The taps are rusted shut however, so one will have to use the hand drill on each barrel to obtain the liquid with the chemistry pot from the Laboratory. As a result, you will obtain a pot of explosive liquid. Use this to demolish the rubble blocking the path to the rest of the Storage.

The explosive does not become active once deposited on the ground near the rubble. To set it off, an object has to be thrown at it. Be careful though, as the blast radius is very large, and standing near the explosive when it goes off can result in significant health loss.

It is now possible to progress all the way to the furthermost room in the Storage, where the rods can be found. It should be noted though, that a Servant Grunt hides in one of the smaller rooms that can be reached from the large, open area you end up in as you follow the hallway. To avoid this encounter, simply skip opening the door to the far room in the big, open area with the large working bench.

Continuing forward, a large room with a lone torch will soon be reached. As the room is entered, the torch is suddenly lit for an unknown reason, probably a hallucination. However, ignoring the event, you will find the rods in a small room that can be reached from this area. Be wary though, for as soon as you obtain them, a Servant Grunt will spawn outside and patrol the area. Hide behind the large crate in the far end of the room, as the beast is likely to break in, especially if it spots you behind the door.

When the music comes to a halt, advance to the Back Hall. You will pass the area where you unblocked the caved-in passageway. The Shadow will roar and rocks will fall: don't panic. However, as soon as you reach the top of the stairs, you need to be wary as there is a Grunt that spawns ahead. When you hear it growl, do not go up the stairs any further. Instead, sprint back and find a dark spot to hide in. Remain hidden until yet again the music has cut. After a tense moment, when all is clear, continue to run to the Back Hall. You can also dart straight past the monster - all that is left to do is escape the Storage, and the exit is not far ahead.

Note about enemies: The Storage is the first location in the game where former human enemies such as Grunts and Brutes are a major problem. Much of the time, they will spawn while you are in a room, often just after you picked up something, in which case you will have to hide in a dark corner of that room. If they spawn while you are out in a hallway or just leaving a brightly-lit room, one rule of thumb is to try to hide in a place that is in the opposite direction from where the enemy is walking. Counterintuitively, this also means that walking toward and past the enemy in the dark is consistently safer than trying to backtrack and hide in the exact area where the enemy will be coming to search. 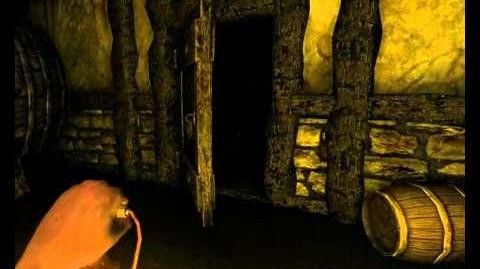 Español
Community content is available under CC-BY-SA unless otherwise noted.