The Servant Brutes are the rarer, more dangerous type of the Gatherers in Amnesia: The Dark Descent. They deal much more damage than a Servant Grunt, and are able to kill Daniel in one hit, even at full health, making survival harder.

The Servant Brutes have a distinctive brown-green color, unlike the pale white of their Grunt counterparts. They are noticeably thinner than Grunts, as well. They have heads that are split open in an almost floral shape, with teeth lining the inside of the opening along with a single small eye hidden far back. It is difficult to see this eye from afar.

Brutes wear leg-less, metal rivets layered over each other and have metal plates and nails that connect their arms and legs at the joints. They are missing the index toe on their left foot. These plates make metallic scraping noises when the Brute walks, making it relatively easy to know whether or not he is coming towards Daniel or not. In place of a left forearm, they have a metal shaft with a massive attached billhook blade.

They can be distinguished from the Servant Grunts by their split-head and the large blade that has been grafted into their left arm, as well as the other plates grafted into their legs and their other arm. They wear what appears to be a crudely patched metallic tunic with no leggings; this tunic does not cover the Brute's back, however.

Much like a Grunt, Brutes also seem to have emotions, when whimpering or crying, with distress, and when attacking Daniel, with aggression. Unlike Grunts, however, they do not gasp and hold their hand(s) to their mouths before looking around when an object is thrown and makes a loud noise, which could imply that the Brutes are braver than the weaker Grunts.

Brutes, like Grunts, have intelligence enough to understand and follow orders from their master Alexander. They have a slightly higher intelligence to the Grunts, however, as Brutes will fully search a room that they suspect Daniel is hiding in. They will also pursue him for much longer.

The Servant Brutes are the rarer and more powerful kind of Gatherer of the two types encountered in the game.

Similar to Grunts, Brutes will make an initial moan to signal that it hears Daniel and is coming to investigate. Brutes make distinctive bellows and groans similar to the sounds emitted by moose or cattle. The Brute appears blind, but is neither blind in gameplay nor lore/story.

The Brute's large grafted arm-blade is their primary form of attack. They can obliterate doors with it in only two hits and annihilate Daniel in as few hits as only one, if Daniel is at the "A few cuts and bruises" health stage. When Daniel is attacked by one, there will be a long slash mark on the screen, as opposed to the relatively small claw marks caused by Grunts.

Unlike a Grunt, the Brute does not look in fright with its hand/and cleaver to its face when it hears a noise, it will simply turn around to investigate at once.

Brutes can be distinguished quickly from the Servant Grunts via their silhouette: their split-heads and large hamstring bladed arms make them recognizable. Their greener color and metal garb provides further visual differentiation. More likely the player will first be alerted to the Brute's presence by hearing their distinctive deep groans. Their relative location can be further divined from the metallic scraping of their legs as they walk.

While similar to Grunts, Brutes are notably more dangerous, given that they can instantly kill Daniel with one attack. They are also slightly faster than Daniel, break down doors quicker, and enter through doorways further, all of which shortens Daniel's time window to successfully hide. On the other hand, they are rarer. Brutes appear predominantly in the Sewer and in the Choir, although they do make minor appearances in the Chancel and Morgue as well. They can also be heard in various other parts of the game, but do not yield dangerous entities. Therefore, they cannot harm Daniel in these encounters, but may reduce his Sanity.

Brutes appear in the following locations:

The appearances in the Prison are scripted and not dangerous. However, encounters from the Morgue onward become extremely hazardous.

A Brute pursuing Daniel in the Choir.

The Brute's single eye, many teeth and a clear view of its armor.

Concept art of the Brute. 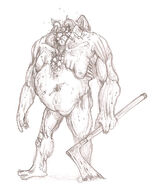 Old concept art of the Brute.