Amnesia: A Machine for Pigs

"Soon I will spill that blue water and split the egg, the atom, my soul!"
It has been suggested that this article or section should be split in multiple parts. Please help Amnesia Wiki by discussing this issue on the article's talk page.
reason: One page represents two spatially distinct levels, with their own loading screens.

Oswald's Mansion is the living quarters of main character Oswald Mandus and the first two areas (1st and 2nd) in the game.

The mansion is rather large, with spacious foyers and halls. It also features many rooms, most of which are inaccessible due to intricate locks.

Edwin and Enoch before Oswald awakens.

This is the first area of the game. This has Oswald Mandus' bedroom in it, where he wakes up at the start of the game to find his children. Besides his room, Lily's room can be found, as well as Edwin's and Enoch's room, and the attic that can be reached by pulling a rope in the ceiling. It is up here Mandus finds the first lantern. After picking up the lantern, follow the children until you see a large room with paintings on the wall. Descend the staircase to find the first phonograph.

The mansion also features a system of hidden passages and corridors which offer a view on the rooms through numerous paintings which turn out to be a sort of one-way looking glass. The first one of these can be found in Mandus' office, by using a hidden lever disguised as a rifle. Follow the hidden passage until you see a lever on the wall, pull it down to reveal a hidden door.

The bedrooms feature beds which are closed like cages: part of a mechanism for entrapping rich guests of the mansion and sending them to the machine, as detailed in this note: October 27th 1899.

Locks on doors and furniture throughout the mansion could be a safety measure against the Manpigs if some should wander into the mansion.

These are all the found documents in the first part of Oswald's Mansion:

In Lily's Honour, a Banquet[]

This is the second area of the game. As you approach the staircase leading to the front door, you will hear a Manpig howling, though it is not encountered at all. Descend the stairs and you'll hear Mandus' children calling you, and then a small tremor which causes the chandeliers to swing a bit.

This part of the mansion is semi-integrated into the facility which is evidenced by numerous hidden sections leading to a number of machine rooms and also by the strong tremors caused by the Machine below. The machinery is hidden behind objects such as the Grizzly Bear at the trophy room, and the bathtub in the guest bathroom. The bear can be moved aside to open the hidden room, while the hidden room behind the bathtub can be opened by using a lever hidden behind a painting.

The mansion also sports a spacious courtyard which offers access to the streets and some parts of the machinery. This is the first part of the game where you have a chance to spot a Manpig, although the encounter is purely visual as it can not hurt you.

This area leads to the Cellar, which can be fully accessed once the machines are all turned on.

These are all the found documents in the second part of Oswald's Mansion:

These are all the phonographs found in either part of Oswald's Mansion:

Found in a room full of paintings on the wall.

Mandus
"You don't mind if I record this, do you? I find it most useful."
Professor A
"Ah, you have one of those wonderful de Martinville's? No, of course not, my dear fellow."
Mandus
"It's my own design, Professor, along with everything you see."
Professor A
"Most useful. You understand, of course, why the Ministry sent me? That they have concerns?"

Found sitting on the parlour table.

Professor A
"I must say my dear man, you look awful."
Mandus
"Yes, I seem to have picked up something rather nasty in Mexico."
Professor A
"I do understand. What you have been through... a lesser man would have crumbled. Yet you have made all of this. Your great factory, your charities, it is a wonder. For one man alone..."
Mandus
"It will all be made clear Professor. But first, a drink?"

Exterior of the mansion

One of many bolted doors.

Another room in the attic.

One of the numerous halls.

The interior of the secret corridor. 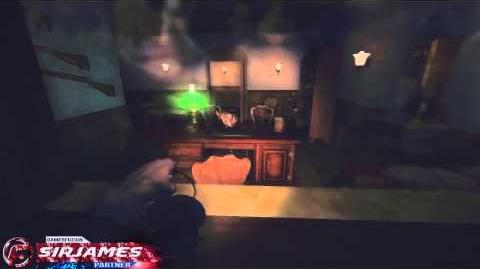