The Manpigs are the main enemies encountered in Amnesia: A Machine for Pigs. They are encountered throughout most of the facility and later in the city as well. They serve as a workforce in the facility. Similarly to The Dark Descent, Oswald Mandus has no means of defense and must use stealth and wits to evade them. Unlike the Gatherers, the monsters have no effect on sanity and they may be looked upon freely.

The Manpigs are deformed, pig-human hybrids created through surgery and alchemical procedures. They patrol certain areas of the facility, however if the lantern is shone on them, they will pursue the player relentlessly.

Although the lantern may immediately alert the monsters, it can also alert the player, because it will start to flicker if an enemy is nearby. The same effect applies to virtually all electrical lamps. It has its grounds in the Compound X, which was being used to facilitate bonding between different cells (human and pig); notes clearly state that "the compound is highly light reactive".

The Manpigs obey the Machine only, as evidenced when it ordered them to slaughter the population of London, or to kill Mandus. They also seem to have an intellect comparable to that of a small child, as Oswald witnesses them playing with toys, and even refers to them as his children.

Two variants of the Terror Meter will play when Mandus has been spotted by a Manpig, depending on the variety of Manpig. It sounds either like a continuous steam whistle (in case of the Wretch or Engineer) or a mechanical screech with hints of steam (in case of the Tesla). However, it's played at a much lower volume than the one in The Dark Descent, and due to the mechanical nature of the game's environment, it can sound more like ambient noise, as opposed to the noticeably unnatural screech of The Dark Descent's Terror Meter.

The Manpigs seem to be the indirect descendants of Alexander of Brennenburg`s Gatherers. In one document, Mandus describes a body delivered to him in a crate that matches the description of a gatherer, furthermore he mentions how he can "smell the orb upon him", and that this is the "work of his great uncle", presumably Daniel or Alexander. This is seemingly what inspired Mandus to begin his own experiments on the human body.

The creation process is somewhat unclear. A human subject is infused with two substances - Brennenburg Infusion Vitae and Orgone Monad Disperal fluid. (Orgone energy is a hypothetical life force proposed in the 1930s and monad is a philosophical term for 'unit', therefore Orgone Monad Disperal fluid can be crudely translated to 'Lifeforce Energy Unit Disperal fluid', Vitae is further explained on pages regarding The Dark Descent.) These combined facilitate the merger of human and pig cells after the desired pieces of both have been combined. Finally since the mixture is sensitive to light, a Schuman lamp is shone upon the subject to reanimate it.

The earlier version of the Manpigs Oswald tried to create was a complete failure. The creatures' Vitae splintered and had them jammed between two dimensions, and later, they escaped into the Sewers. The later version of the Manpigs created by Oswald had been tested with so much Compound X that it became incredibly unstable, causing the creature to teleport in and out of existence, which has driven it insane. Oswald ordered his trusty servants to lock these creatures up in a tower.

The Manpigs come in four types:

Render of the Engineer Manpig

Render of the Wretch Manpig

Render of the Tesla Manpig 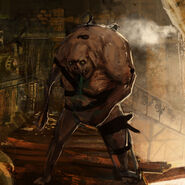 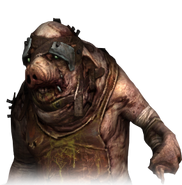 An Engineer encountered in the Engine Rooms

A Wretch playing with Building Blocks

A Wretch about to Attack
Add a photo to this gallery
Retrieved from "https://amnesia.fandom.com/wiki/Manpigs?oldid=56595"
Community content is available under CC-BY-SA unless otherwise noted.