"A cleansing fire always burns little Mandus, but it purifies and it makes anew."
Malo de Vigny requires cleanup to better fall in line with Amnesia Wiki's Manual of Style.
issue: not specified

Justine, let me taste you!

Monsieur Malo de Vigny (French: /ma.lo də vi.ɲi/) was a talented former musician turned violent cannibal, who served as both captive and guard in the Cabinet of Perturbation.[4] Malo is one of the monstrous Suitors from Amnesia: Justine, and as such, he is one of the game's three major antagonists.

He is voiced by Jeff Buchanan.[1]

Malo appears in-game exactly the same as the other two Suitors (Aloïs and Basile), as a malnourished, nearly-skeletal, shaven, nude man hobbling around the dungeons of the Florbelle Estate. His skin is pale and numerous lacerations can be seen on his body. His hands and legs are wrapped in chains and there is a metal wheel around his neck to keep him from resting.

Malo appears to be the most maddened of the three Suitors, as he threatens to and, if given the chance, actually will eat Justine because he grew "tired" of eating his own flesh. He speaks in a haughty friendly manner.

Malo de Vigny apparently courted the French aristocrat Justine Florbelle a fair time before the events of Justine, as both the wistful letter of fellow Aloïs Racine as well as the rumors of high society in Paris confirm.[2][5] As late as 1858 CE, he was a well-respected, highly talented musician, a virtuoso of the violin, and a "fellow" composer alongside contemporaries like George Bizet.[2][4][6]

March 18th: the Incident at the Conservatory[]

On the night of the 18th of March, 1858, Malo was honored with a solo "grand premiere" of "several new arrangements" at the prestigious musical conservatory in Paris, the "Conservatoire de Musique"—most likely held in the auditorium known as the "Salle des Concerts."[4] In attendance were his beloved, Mademoiselle Florbelle, and her two other friends, the Monsieurs Aloïs Racine and Basile Giroux, Malo's romantic rivals.[5]

That evening, however, Malo de Vigny showed up to the performance obviously, exceedingly drunk.[7] Malo was so intoxicated that he couldn't play properly, apparently making extremely unpleasant music in his attempts on the violin, and eventually the audience booed at him, evincing their extreme displeasure with his performance and behavior in this prestigious and important setting.[6][7]

Malo, in his heavily intoxicated state, reacted badly, reportedly "threw his bow into the audience," and physically gave out on-stage, collapsing and possibly passing out.[8] Justine was apparently visibly amused by the whole event, of which even the attendees and the reporting newspaper took note. Basile and Aloïs, on her request, forcibly removed Malo from the stage at that point.[7] The unpleasant disturbance of the concert was ameliorated by other musicians present who managed to satisfy the audience by performing excellently in Malo's place, but the damage to his reputation and psyche were already done, possibly irreversibly so.[9]

Malo is the last enemy encountered in Justine. He begins to threaten the character in the flooded section of the dungeon by breaking down doors and pursuing Justine through the level. Nearby Inspector Marot is chained up. Justine has a choice to make; either guaranteeing her own safety by leaving the policeman to be brutally murdered by Malo, or saving the inspector and risking the mad suitor catching her. In Malo's cell, chunks of flesh and smears of blood—presumably his own—can be found.

Malo is impossible to hide from.[citation needed] Though he is blind, he is always aware of Justine's presence.[citation needed] If you hide from him he'll make a beeline toward the room you are in, making it impossible to hide. This is possibly because he was a violinist,[speculation] so the man had to develop a very refined sense of hearing to distinguish between tone and sound when playing music, this means he can easily detect Justine trying to sneak away in a flooded basement, as the water makes Justine's movements much easier to hear.

If the player is quick enough, they can run into the second room, close the door with the lever to their left, secure Inspector Marot's door, and then hide behind the left set of bars as Malo breaks in. Malo will then make an awkward search patrol back and forth between the exit door and Marot's cell door. Each time Malo leaves the exit door, the player can crawl up to it and undo it a little, repeating this until the player can simply flee at which point Malo will begin the normal chase sequence in the final hall.

Even though Basile is said to be the strongest of the Suitors,[citation needed] Malo is the only one who actually shows immense strength. He breaks down the door connecting the first flooded chamber in several minutes and when Justine is bringing the missing cogwheel with her to open the next door, he tears the door down in about 10 seconds or when Justine put the cogwheel on the machine and is at the gate, he will bash down the door. Whether Justine either saves or sacrifices Inspector Marot, an intense pursuit occurs as Malo chases Justine through the final dark winding hallway; destroying both the final metal door and any obstacles in his way in less than a second. Malo's swings become rapid during the final chase. 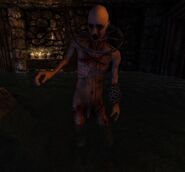