Amnesia Wiki
Register
Don't have an account?
Sign In
Advertisement
in: Citations needed, Cleanup, Articles with issues,
and 3 more
English

"I've read every book I can find on the subject.
While rich in legend and hearsay, my knowledge is lack for the insight I crave."
This article or section needs to be wikified. Please help Amnesia Wiki out by improving the article!

I bid you welcome to my Cabinet of Perturbation. It is my study of the human psyche — specifically yours.

Mlle. Justine Florbelle is the main character and anti-heroine of Amnesia: Justine. She was a French noblewoman living outside Paris, the daughter of a renowned psychological researcher, the object of romance for several men, and secretly a sadistic torturer and murderer.

She is voiced by Emily Corkery.[1]

Born of French aristocracy, Justine was born with an unspecified mental illness and the child only had one friend growing up, named Clarice.[2] Clarice was a girl of similar age from the servants quarters and was often scolded by the maids for merely playing with Justine.[2] This was common, as nobility around this time period had minimal contact with their social inferiors.[citation needed]

Her father, Monsieur Florbelle, was an acclaimed psychotherapist.[citation needed] Justine's mother died when she was very young, and as such, she cannot even remember what her mother looked like.[citation needed]

Monsieur Florbelle, who was secretly quite mad,[citation needed] was interested in studying the human psyche, so he isolated his daughter for a series of psychiatric tests.[citation needed] This limited contact with Clarice even, so from the age of eight onward Justine's childhood was a completely lonely one.[citation needed]

However, little Justine started to develop an inferiority complex for wanting to be as attractive as her mother.[citation needed] To worsen matters, as a result of the constant testing, Justine came to view the results as an important way of judging both herself and her father.[citation needed]

This disparity, and never once pleasing her father with the results of his tests caused a huge rift to grow between them. After four years of isolation which robbed her of a healthy, natural upbringing and development, Justine had become increasingly unstable.[citation needed] She began to show the basic characteristics of being a narcissist and a complete psychopath.[citation needed]

She often tried to gain control of situations in regards to her father's tests, upsetting the chambermaids, and often provoking her father simply to get a reaction out of him.[citation needed]

Her father could no longer justify his research. Writing to Herbert, he confessed it had done nothing to help him understand Justine's mental illness.[citation needed] He was going to abandon the tests to mend his relationship with his daughter.[citation needed] He never had the chance.

Mademoiselle Florbelle took over her father's research and study rooms underneath the estate, but instead of furthering the knowledge of the human psyche to treat mental disabilities, turned it into her own personal torture chamber, called the "Cabinet of Perturbation," for her own sadistic pleasure.[citation needed]

Justine began to demonstrate that she, even more so than her father, was a complete monster. She reveled in the suffering she caused to others, and even subjected herself to that same cruelty by performing pre-arranged tests upon herself after short bouts of self-induced amnesia to see how well she fared without knowledge of who she was or what was happening to her.[citation needed]

Justine hated, and continues to hate, the notion of being held accountable to the law for her actions, and is very elitist, believing the aristocracy does not need to know right from wrong, as "they are always right."[citation needed]

She pitted the men against one another, eventually leading to their downward spiral into madness and destruction.[citation needed] Her inferiority complex, wanting to be as attractive as her mother, only worsened as time went by; these feelings intensified to the point where she actually blinded the Suitors because she wanted to believe her beauty was quite literally "blinding."[citation needed]

Aloïs was easy to control, as he already had a self-destructive fixation on her to begin with.[citation needed] Poor Malo had already gone insane thanks to her deeds. Basile, however, was troublesome and no longer infatuated with her, growing quickly tired of her "games."[citation needed] With assistance from Aloïs, she managed to drug and abacinated (blinded) Basile to prevent him from leaving.[citation needed]

Aloïs, Basile, and Malo had unwittingly become her newest test subjects in the Cabinet of Perturbation, where she drugged them with absinthe, tortured them, mutilated their bodies, and finally made them part of the tests on herself during her self-induced fits of amnesia.[citation needed] The three men are now known as the Suitors, serving as the enemies in Amnesia: Justine.[citation needed]

Despite all her cunning and her influence over law enforcement in Calais, after these events, Lucien Racine, Aloïs' father, had become very suspicious of Justine's actions and suspected foul play when she stole his son away. He enlisted the help of Inspector Felix Marot, Dr. Victor Fournier and Father Hector David to find a legal way to reveal her madness and incarcerate her. She abducted these three men as well, and they become the hostages encountered in the Cabinet of Perturbation.[citation needed]

Not even concerned that her dark machinations were nearly discovered by the public, Justine invited other members of the French aristocracy over to her mansion for a banquet. She had devised a test for herself, "the best one yet," to see if she had any trace of humanity left in her. She decided she would be unarmed and completely vulnerable to any threat. Justine also orchestrated several hostage situations to see how she would react.[citation needed]

She moved her prisoners into the manor's torture chambers and created various obstacles throughout the rooms. Then, she prerecorded audio messages onto multiple phonographs to set the scene. Justine then released the Suitors from their cells to roam the Cabinet blindly, but not before locating a secure prison cell so she can voluntarily drug herself. As in all of her other self-tests, the fast-acting concoction she ingests resulted in her having complete, but temporary amnesia as a side effect.[citation needed]

"A cleansing fire always burns little Mandus, but it purifies and it makes anew."
Justine Florbelle requires cleanup to better fall in line with Amnesia Wiki's Manual of Style.
issue: Use of Present Tense

The woman wakes up, lost and confused. She can remember nothing, not even her own name. After freeing herself from her cell, she wanders around the dungeon-like complex, guided by the sadistic voice of a mysterious woman named Justine. The woman quickly finds out she is not truly alone, as she stumbles upon several people calling out to her for help, and several monstrous, shambling madmen hunting her down, apparently having confused her for Justine.

If she survives the facility and its many challenges and dangers, the woman collapses from the stress and madness of the place, or perhaps a side effect of the drug she drank. She then regains consciousness, as well as her memories and true, unsympathetic personality. Justine Florbelle complimented herself on constructing the best and most elaborate test yet.

With the final test complete, Justine bolted the door to her Cabinet shut (regardless of whether the people on the other side of the door were the Suitors threatening to kill her, or the hostages begging for help). As Justine walked back upstairs, Clarice, now her housemaid, called down from the kitchen, asking if everything is all right. Justine laughed off her concern and assured her that she is quite alright, asking if everything is ready for the evening banquet.

Depending on whether she has found all the letters addressed to her late father in the basement or not, Clarice either asks if Justine heard voices from downstairs, which they both write off as Clarice being "silly," or else Justine gives her servant instructions to post replies to the recovered mail, wanting them to know that she's "still alive." 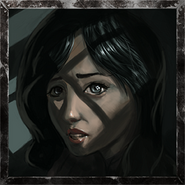 Achievement portrait - an artistic impression of Justine, gone neither altruist nor egotist. 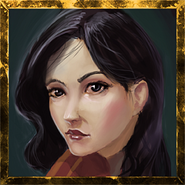 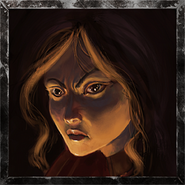