Listen - I know Salim. And I know you. I know what you're capable of. He'll make it. And you'll get back to him, even if all hell stands in your way.

James Henry "Hank" Mitchell is a major character in Amnesia: Rebirth. He was the expedition leader of the trip from Algiers to French Sudan on the Cassandra, and one of the initial survivors following its crash.[1]

Hank is a seasoned explorer, with a history of several expeditions under his belt. He seems to have known both Tasi and Salim for some time, even prior to their marriage. He was the one to reach out to Tasi to invite her on the expedition,[2] and was aware of the possibility that this experience could help the couple heal from the loss of their daughter.[3]

Keenly aware of the needs of his team, Hank's considerations are clearly illustrated in his notes found in the Algerian caves. In flashbacks, Hank is often taking care to look out for Tasi's grief and assuring her whenever he can.

Knowledgeable and calm in the face of disorder, Hank navigated his team to some caves near the site of the crash. Later he helped most of the team survive the ghoul of the fortress, but not without suffering a grave wound that was almost certain to end his life. After the attack, the survivors happened upon an oasis where they encountered the Empress, who led them to the Other World. promising to help if Tasi accepted her offer. While Hank knew his life hung in the balance of Tasi's choice, he did not pressure her to accept like the others, and encouraged her to choose for herself.

After being healed by the fountain of the Empress, Hank remarked on the incredible discovery of the other world and expressed some regret in having to leave it. Soon after, he experienced the first signs of the Harvester transformation, wincing in discomfort from a darkness in his eye. His transformation imminent, he implored Tasi to run as he lost control of his body, killing Malick in the process, who volunteered to allow Tasi her escape.

That moment was Tasi's last memory of Hank, until she returned to the Otherworld to retrieve her kidnapped daughter near the end of the game. She found him alive but fully transformed into a Harvester, between the barred walls of the Tower. However, he was still of a sound mind and had managed to trap himself in an elevator shaft, restraining himself with a cable around his neck (possibly in an attempt to take his own life). He encouraged Tasi to keep fighting the curse and to not let it overtake her. Tasi mournfully lamented that she couldn't help him and had to save Amari, leaving him behind. If Tasi returns to the elevator shaft, after escaping the last Wraith, she finds Hank dead and no longer reacting to Tasi' presence. 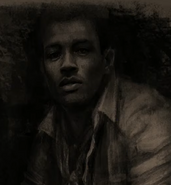 Hank's more grave expression, in one of Tasi's sketches.

Hank studiously going over documents with Rachael Holt, in one of Tasi's crew sketches.