"A cleansing fire always burns little Mandus, but it purifies and it makes anew."
Basile Giroux requires cleanup to better fall in line with Amnesia Wiki's Manual of Style.
issue: not specified

I'll kill you, you whore!

Monsieur Basile Giroux (French: /ba.zil ʒiʁu/) was the able-bodied, ill-tempered wood-worker turned insane and violent by the relentless psychological and physical torture of the noblewoman he sought romantically, who served as both captive and guard in the Cabinet of Perturbation. Basile is one of the monstrous Suitors from Amnesia: Justine, and as such, he is one of the game's three major antagonists.

Basile appears in-game exactly the same as the other two Suitors, as a malnourished, nearly-skeletal, shaven, nude man hobbling around the dungeons of the Florbelle Estate. His skin is pale and numerous lacerations can be seen on his body. His hands and legs are wrapped in chains and there is a metal wheel around his neck to keep him from resting.

Basile Giroux is the second of the three Suitors whom mademoiselle Justine encounters throughout her test. His anger towards Justine is implied to originate from an event where Justine drugged him, tied him up and blinded him after forcing him to read the line she prepared for him. Basile appears to have retained the most sanity of the three Suitors and wants to exact retribution upon the woman who ruined him.

In a phonograph recording, one can hear an exchange between him and Justine that involves Basile regaining consciousness after being drugged, and finding himself restrained in some strange device. After this, Justine forces him to read from a prepared script,[citation needed] which states "your beauty is blinding." At that moment, Basile screams out, realizing he's been blinded. Justine laughs at him, and Basile curses her for blinding him and threatens to kill her.

It is possible that Basile was a carpenter, as entering the empty prison cell between the other two cells (where Aloïs and Malo were being held) causes flashback sounds of sawing wood and hammering. Other elements in the game that hint to Basile's former career are that Aloïs' note stated Basile was strong, and if the player enters any other cell, it won't produce flashback sounds that require physical work (apart from the racquet sounds in Aloïs' cell and violin sounds in Malo's). Several bricks in Basile's cell were removed, but not without it causing injury, as there is blood around the brick slots and on the bricks themselves.

Basile is a more threatening enemy than Alois and has aggressive voice lines.

He appears in the basement area after leaving the library section, whispering threats and curses as he hunts for Justine. When he appears, all the lights in the basement will be mysteriously blown out, and the door will slam shut, locking you in.

Once spawned, Basile does not de-spawn and will continue to patrol the area looking for the player. It is necessary to sneak past him in order to continue. However, this isn't too difficult as long as you do so without making too much noise since he is blind. Once the Justine enters the exit corridor Basile will eventually realise what is happening and will attempt to catch her.

As soon as Basile Giroux appears the player can hide in a closest spot to the corridor from which Basile walks out from and start throwing rocks in the center of the basement. Once Basile wanders off to investigate the source of the sound player can either sneak away to the exit or make a run for it. A much riskier fit includes the player running right through the basement and dashing past Basile. Basile will attempt to bash Justine but will miss and it will take some time for him wind up and charge after her. 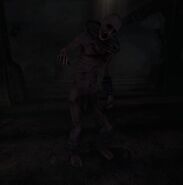