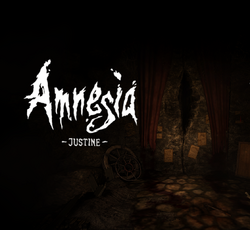 Amnesia: Justine is an expansion for Amnesia: The Dark Descent, released by Frictional Games on April 12, 2011. It was initially only released for the Steam version of The Dark Descent, but was later included as an update for all other versions of the game.

After the imprisonment of these Suitors, along with three other men as immobile hostages and setting up phonographs with recordings of her own voice to guide herself through her own tests in her Cabinet of Perturbation, Justine makes herself pass out in a locked room by drinking an amnesia mixture composed of Lithium. The game begins when she wakes up and activates a nearby phonograph. She hears her own voice explain the psychiatric tests herself,  including that there will be choices where Justine must kill or save the helpless people she comes across as part of her tests. Justine must collect an empty lantern (which, as there is no oil in this game, is useless without level editor and hacks) hanging from the ceiling that only becomes reachable after the first phonograph has been activated. Taking the lantern triggers the only door out of the room to open.

The first room Justine encounters is a prison block with 6 cells: Three of which once held each of the three Suitors, and one of which containing a prisoner named Dr. Victor Fournier, bound to a table, which Justine can choose to kill or let live. If Justine pulls the lever next to the door of Dr. Fournier, a spike will lower down and kill him by puncturing his midsection. This action will lower a ladder down from the ceiling, allowing the player to progress through the tests. If Justine chooses to let Fournier live, she will have to obtain a part of the broken ladder located in an earlier area and stack boxes to reach the ladder and attach the part, requiring more effort. Also, if the cell nearest to the entrance is entered, Aloïs will appear as the first Suitor. Fortunately, the player can hide from him until he goes away. He is the only suitor that will leave the area after time. Note that near the entrance to this prison block is a ledge that holds boxes and a hidden wax cylinder needed to play certain phonographs, which also requires stacking boxes to be reached.

After leaving the prison block by entering a tunnel in the ceiling, she must drop down into a hallway which leads to three accessible locations of interest:

Justine then progresses to the Library, a hallway with 2 doors on each side and a light box projector at the end of the hallway. The 4 rooms in the hallway contain slides in the bookcases and on tables, which can be used on the projector if it's lighted by a tinderbox. One of these rooms however, holds the next person that Justine must choose to save or kill, being Father David. David is not seen in person, but is heard on another side of a wall. He is also seen on a painting in the same room, which shows Father David being bound to a table, completely naked. The wall where David is heard has a lever and two slots where the slides can be inserted. The lever must be pulled to access the next part of the game/tests. If the lever is pulled with the incorrect or no slides inserted, Father David will be heard being brutally ripped apart and killed. If the lever is pulled with Slide #4 on the top slot, and Slide #3 on the bottom one, Father David will be released unharmed, thanking the player.

This area also contains the key to unlocking the secret ending- a letter. In the room with the light box, there are two alcoves on either side, both containing bookshelves. The niche on the left has nothing of interest, save for a door that makes noises as something claws at it from the other side. It is presumed that Basile is the one scratching, but the door is boarded up and whatever is there never gets through to clear up the matter.

After this, Justine enters a room or cellar where all the lights blow out and the door locks behind her. This is where the second Suitor, Basile, appears. When Basile appears, he will not despawn and Justine must figure out a way to get around him. Crouching is more than helpful, as Basile is blind and crouching enables you to be virtually silent.  Basile automatically turns hostile after the player passes a pile of objects close to the exit. However, at this point the player is so close to the exit that it usually doesn't make a difference. Objects can be thrown to slow or confuse Basile.

After getting past Basile, Justine will enter an area that is filled with water at knee level. This is where the third and final "fate-choice character" is seen, Inspector Marot. Additionally, the third and final Suitor, Malo de Vigny, appears here as well. The small room that Marot is trapped in can be closed. If Justine does not close the door to this room, Malo will appear, attack and kill Marot first, giving Justine ample time to escape. If Justine closes the door to this room, Malo will not reach Marot, saving the latter's life, but will cost Justine the time to escape. If Marot is spared, Malo will then only focus on Justine. Avoiding Malo can be difficult despite that fact that he's blind, as the player will make a lot of noise moving around in the water.

If Justine manages to escape Malo, she will enter a crypt. Moving ahead in the crypt brings Justine to an area made of connected hallways with disturbing messages written on the walls, and will slowly drain Justine's sanity. After this, she will enter a large room where she hears a recording of her voice one last time, stating that because she herself has went through all the tests, and as a result of that, can face eternity without doubt and fear. The walls begin closing in and the room now becomes inescapable. Justine panics and passes out, then wakes up to see that the walls have stopped closing in, and retract back. At this point in the game, the player is now assured that they are playing as Justine when she starts speaking. Justine assures that the door behind her is locked so none of her test subjects can leave and walks upstairs and speaks to her friend and maid, Clarice.

If the player managed to save all three hostages in the game, the voices coming from behind the locked door differ from if the hostages die. The former consists of the hostages begging to be freed, while the latter features the suitors' voices.

After the completion of the story, you enter winding hallways filled with disturbing messages written in blood. When you exit the hallways, you come across a phonograph chained to the ceiling. The phonograph will congratulate you on completing the tests. After the message, the two walls on either side of you begin to cave in and your character blacks out. Upon awakening, your character locks the door behind you and begins to speak. It is here that you finally understand you were playing as Justine for the whole game. Justine is mentally unstable, and the test was a way of judging whether or not she had any humanity left in her. Justine then leaves the dungeon, and talks to Clarice about supper. If all notes are collected, a special ending occurs, with Justine walking out of the dungeon and into what looks like Brennenburg. She then asks the maid to send a letter even though it is "years late." She says that "they should know... I'm still alive."

There are several notes scattered throughout the game.

Retrieved from "https://amnesia.fandom.com/wiki/Amnesia:_Justine?oldid=35812"
Community content is available under CC-BY-SA unless otherwise noted.