"A cleansing fire always burns little Mandus, but it purifies and it makes anew."
Al-Mamaru Fort requires cleanup to better fall in line with Amnesia Wiki's Manual of Style.
issue: not specified

The Fortress, or Al-Mamaru Fort, is the second major location visited by Tasi in Amnesia: Rebirth, after the cave complex (including the Caves and the Deeper Caves).

Al-Mamaru Fort is located somewhere in the Algerian desert. It is a large castle-like structure, nestled in mountains. The style and the construction are of an Arabic or north-African style, built by an Ottoman commander named Tarkan Reis (Chief Tarkan) in mid-17th century.[1]

The Fortress contains three (3) main areas, differentiated by loading zones, as well as broadly two (2) other exterior areas through which Tasi passes before and after visiting the Fort, respectively. Tasi must eventually visit each of these interior areas to proceed in the game.

In the mid 1600s, an Ottoman military captain known as Tarkan Reis seized the oasis by the mountain pass and made himself a fortune charging for access to its water. He built a fortress to guard his investment, and created a giant cistern in the tunnels that honeycombed the rock beneath the fortress, not only capturing the oasis water, but gathering more water from open sky-windows. Controlling the pass and the water at the end of it meant that Tarkan Reis controlled the major trade in that region. He gathered wealth and flaunted it by building an impressive garden in the southwest corner of the fortress. In the middle of the garden he placed an Arabic pump, giving access to the water in the cistern below.[1]

Profssor Herbert's expedition team, including Daniel, arrived to Algiers in May 1839. On the 16th of May, the team had to take shelter in this fort until sun is lowered.[2] They had communications with the outside world at this time (an unfinished letter to Hazel can be found in the inner Fortress). They continued either searching or excavating Tomb of Tin Hinan.

The French occupation of the Outpost began in 1911, was scaled back in 1917, and then thoroughly reinforced again in 1923 by the Foreign Legion.[citation needed] Even as other similar outposts were scaled back, this one held on far longer than sensible. The French refurbished the old Arabic fortress, and installed a wind turbine, allowing for electricity in a few select areas.[citation needed] In 1929, the fort’s Captain ordered the excavation of some of the collapsed areas under the fort. The activity attracted a pair of ghouls from the nearby Tomb of Tin Hinan.[citation needed] The ghouls stalked the French, drove them to terror, and hunted them down one by one before torturing them to death.[citation needed] One Frenchman (the corpse in tank) managed to escape and locked himself in the tank. But he was badly wounded, and soon bled to death. Years later, raiders came along and bent open the tank turret hatch, and stole the ammunition inside.[1]

In 1939, Tasi visited the fortress on her journey. Although seemingly abandoned, it was littered with human corpses and riddled with traps. In the Inner Fortress, Tasi found the radio and communicated with the Doctor and Yasmin, who informed her that help was found in the village. They advised Tasi that she should go to the village and unite with them. She spotted the village on the map during the conversation and then, headed to exit. In order to leave the Fort, Tasi needed to blast open the Fortress gates with the tank, as the gates were either blocked from the other side or simply too heavy for her to move. She found the notes about preparing a gunpowder in the Arsenal and prepared the tank round accordingly. However, when she fired the tank, the ground underneath collapsed, and Tasi fell underground with the tank into tunnels connected to the Cistern.

A room inside the fortress.

What appears to be a telegraph room.

A distant view of the fortress. 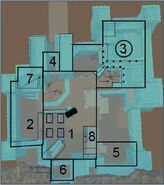 An unfinished letter to Hazel, from Daniel

A map in the fortress showing its relative position to the mountains and nearby villages.